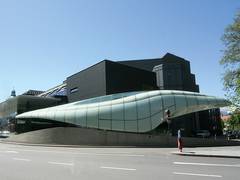 Fast and beautiful: the cablecars and funiculars up to the Nordkette. More landmarks created by star architect Zaha Hadid. Awarded with the “European Union Prize for Cultural Heritage / EUROPA NOSTRA Award 2010″Imagine having lunch in town, browse the shops, – and then change to a mountain restaurant for a leisurely afternoon coffee. In Innsbruck this is reality, thanks to a total make-over of the rail and cableways leading up to Nordkette, a Mecca for skiers, snowboarders and hikers right on Innsbruck’s doorstep. According to the Innsbruck Nordkettenbahn Ltd, the company responsible for this ambitious construction project, the ride from the city centre to an altitude of 2,300m takes just 20 minutes.From Section 1, with two gondola cable cars, passengers are taken from Hungerburg to Seegrube and Hafelekar. This means fast access to the Nordkette winter fun for skiers, snowboarders and sun seekers alike, to its extreme down-hill runs for pros, off-piste slopes for nature lovers, pipes and backcountry for boarders and freeriders, as well as the sun terraces for those who love to just lounge in the sun.Thanks to the careful adaptation of the upper and lower terminus buildings, which date back to the 1920s, the new mountain link provides an unusual and interesting contrast between state-of-the-art technology and architecture of special historic interest. At the Seegrube there is a choice between a self-service buffet area and an upstairs restaurant with breathtaking panoramic views of the town and surrounding mountains thrown into the bargain. After its completion in November 2007, Section 2, a funicular railway joiningInnsbruck’s historic centre with the Hungerburg area has become an even more spectacular architectural landmark. Zaha Hadid, architect of the unique Bergisel Ski Jump, has designed the downtown terminus as well as the Hungerburg and Alpenzoo stations – daringly structured and boldly functional in a public space. The buildings appear almost to float, as their light, fluid structures contrast with the surrounding mountains while at the same time seamlessly blending into their surroundings. The tracks, too, are routed in a unique way, crossing the river Inn via a suspension bridge and continuing partly through tunnels, partly out in the open, thus providing vistas of the town and its surroundings.By the way, Zaha Hadid – who was the first woman ever to receive in 2004 the prestig-ious Pritzker Architecture Prize – is currently making furore in the Arab world. Her ‘floating towers’, a Dubai business development consisting of three office towers merging into a single structure, represent already at their construction stage one of the most spectacular architectural statements in the United Arab Emirates. Also the plannedDubaiopera house to be built on a man-made island will bear the handwriting of the London-based, Iraqi-born architect.The Congress Innsbruck, just a few steps away fromInnsbruck’s medieval old town, is the starting point for a fascinating journey. In 20 minutes you will travel across town and river, forest and solid rock to get from city centre to the very heart of theAlps. No other city inEuropecan offer a similar contrast between town and mountain to be reached at such speed, in such a spectacular fashion. Once againInnsbruckis living up to its reputation asEurope’s winter sports capital.